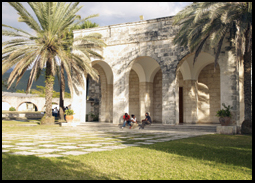 We go there for weddings, sit in the pews for carol service and all love to pose for ‘selfies’ beside the gigantic columns outside. Yet do we ever stop to think about its history and what went into its construction and overall design?

I sought to take a deeper inspection of the chapel on the grounds of the University of the West Indies as it architectural design is unique and the significance it plays in so many of our lives is as good a reason as any to examine it in greater detail.

Known simply as ‘UWI Chapel’, the building situated near the main gate of the University of the West Indies Mona campus, seem to be a throwback to a bygone era and that is exactly what is. Dating back to the 18th century, it was once a place where rum was sold. Years later the physical hardware, mainly the stones, were carried to the Mona campus and re-utilised in the formation of the chapel.

Its origin began in Trelawny in 1799, as part of a stately Georgian building on a vast sugar estate of Gale’s Valley.  More than 200 years later, having served its purposes for rum storage, it was deemed worthy for an entirely different ‘spirit’ and by 1955 a famous visitor by the name of Her Royal Highness Princess Alice, Countess of Athlone, suggested to Mrs. Kelly-Lawson, then owner of the Hampden and Gale’s Valley estates, that this fine example of West Indian architecture could be preserved for greater usefulness if presented to the College for reconstruction as a chapel. Wiser and more practical words have never been spoken!

The transportation of the stones and it transformation into an elaborate edifice was painstaking. The projects was handled by the college’s first resident engineer, Mr. A. D. Scott who saw to it that the old building was taken down and transferred stone by numbered stone, across the island. Some of the cost of transportation was absorbed by the then Custos of the Parish of St. James. Through Princess Alice, a kindly, anonymous Canadian donor made a whopping donation of 40,000 pounds sterling and the construction of the chapel began in April 1956.

British architects Norman and Dawbarn, supervised the reconstruction of the building, incorporating the original gorgeous Georgian style with the more contemporary functional design befitting an institution of learning. Another firm out of London designed the stained glass East Windows, a gift from Princess Alice, which carries the central figure of the risen Christ. Later, a portico was later erected at the west door.

Now the designers may have been British but several countries have a part in its overall composition and the finished products. Its impressive organs was made by an English man by the name of J.W. Walker; the wood used in the interior was transported from the island of Belize and the baptismal fountain was erected using Barbadian limestone, crafted by Guyanese/Barbadian sculptor Karl Broodhagen. The marble chips used in the flooring of course had to be from nowhere else other than Italy. All along the north wall of the Chapel, just below the coping, can be seen the inscription:

Back at home, Jamaican influence is visible in the ceiling and in some of the wood and flooring. Some artistic works are done by Alvin Marriott; a concrete and steel statue of ‘The Sorrowing Christ’ was sculpted by Christopher Gonsalez plus a painting by artist Ralph Campbell.

Records show that the corner stone was laid on June 5, 1956 by then Governor of Jamaica, Sir Hugh MacIntosh Foot and the first church service was held on June 21 1959. Months later, the Chapel was officially dedicated on February 14, 1960 and the during the Service of Commemoration days later, Princess Alice was officially installed as Chancellor.

The inter-denominational showpiece of the university, its elegance both inside and out compliments the overall prestige of the tertiary institution.  The beauty of the architects draws people through its doors who host scores of elaborate weddings, graduations, concerts, carol service, memorials and baptisms etc.  A few years ago, the building was officially declared a national monument by the Jamaica National Heritage Trust.

The basic pew seating accommodates just under four hundred persons; with additional chairs this can be bumped up to over seven hundred.  Refurbishing working was done in the late 1990s through the university’s Endowment Fund on the occasion of the commemoration of  the university’s 50th anniversary.

Some info Adapted from:  www.mona.uwi.edu