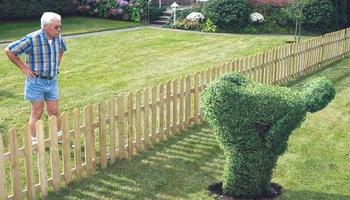 Now you may have money, a good family, and a gorgeous home, all of which you are extremely proud of. Unfortunately all of that does not amount to a hill of beans if you also have one annoying additional element. Nope, not termites (though those suckers are nothing to sneeze at!). No, what I am referring to may actually be worse than those little destructive pests. What I am talking about are nasty neighbours.

Yep. Neighbours. Those pesky, interfering, loud mouth, music blaring fools that either live right next to you or within close enough proximity to make enjoying your life and property a real headache.

There is almost nothing worse than nasty neighbours and by nasty I am not necessarily referring to their hygiene or sanitation standards. It’s more of an I-don’t-give-a-damn attitude some have that clashes with everybody’s right to the peaceful enjoyment of their residence.

In my lifetime I have been cursed with some neighbours that make ‘Dennis the Menace’ seem like Charlie Brown in comparison. For instance, as a child in the community of Braeton in Portmore, the family directly in front of our home was led by a matriarch that was certifiable and this was evident even to me at the tender age of 4 or 5. This woman would get up in the morning and water her mango tree but instead of watering the roots, she would water all the leaves while holding lengthy and animated conversations with them! To add insult to injury, she thought she and her brood were better than us so they were not allowed to play with us which meant of course that I just had to torment them. One night the husband came home drunk (I guess living with such a nutcase drove the poor man to drink) and his lack of good judgment made him crashed his car into our gate. Now this woman came out and instead of offering an apology, she got all heated and stated throwing words as if my family was at fault. You know that did not go down well at all right?

Another nuisance from the pit of hell I encountered when I first went on my own as an adult in Cassia Park. I lived beside a woman with two adult daughters and a young son. Now the son I liked as he was a sweet kid but the daughters were a whole other matter. To put it nicely they didn’t see the value of working so they were very generous with their ‘front’ to any and everybody willing to partake of what they had to offer so it was kinda obvious to everyone on our road that these two grazmites took on more men than even the army. And when I say they took on men, that is exactly what I meant. They would get leant up at the side of the house, in cars in front of the house whether night or day and when people complained to their mother she buried her head in the sand and said people were just telling lies on her two precious princesses. And you know the most ironic thing about it all, these two were always hungry and half starved looking. They never seemed to have a cent so they could not have been charging much or maybe all their customers gave them ‘IOUs’!

When they were not shagging at the side of the house they were on my roof or in my yard picking off all the mangoes on my side of the fence. Now what you wanna do with your body is your business but when it comes to me and mangoes when you start interfering with what’s mine, we gonna have a problem and that is exactly what developed as I let them have it in no uncertain terms! Brite!

Moving back closer to home (actually right next door) put me in the cross fires of a particular crazy woman who many thought was sweet and caring but having lived near her previously, I knew was a damn demon. Apparently she wanted my premises for a friend of hers and when I got it she was not happy and so she pretended that it was all kumbaya but under the surface she was waiting to plan my demise and she got her opportunity when one evening I left for work and she start on her verandah and watched as a man broke into my home. She watched him turn on every single light in the house and pretty much have a jolly old time combing through looking for money and valuables. By the time my mother and other neighbour realised that my house was compromised while I was at work, the man was long gone. When the police arrived this was when she came out to say “Oh and I saw the person over there and thought he was a friend of yours’” Like seriously?! So a friend of mine would have broken off the lock etc. I looked at her differently from that day and vowed that when her time came I would turn up for her bonfire with marshmallows and popcorn because knowing how evil she was, someone would take her down without me having the soil my fingers.

When I moved to Patrick city I had a young couple as neighbours and they had the sweetest little baby girl and the three of them were great neighbours to have around. We enjoyed each other company as well as each other’s space and I never had an issue with them. When they informed me that they were moving back to her old community because of financial reasons I understood but missed them greatly. I wondered who would replace them and was not long in finding out that the new couple was no way as nice, or considerate. He spoke on top of his voice morning, noon and night regardless of the conversation as he felt he was some big shot deal maker while she had the most annoying laugh and was always laughing. They played music loudly. And it was the same CD over and over and over and over every frigging morning! I thought I was gonna go crazy as these two pushed my button to no end but apparently I wasn’t the only one as my husband could not stand the noise invasion one morning and he let them have it good and proper. I was proud of him because he saved me from carrying out my kerosene and matches plan that I had been nursing secretly.

So you see is not Jinx alone have problem with noisy nasty neighbours. I too have had my fill and then some. What about you?