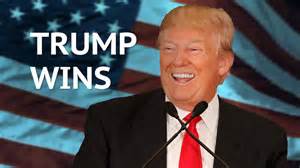 After much whooping and hollering; protests and demonstrations, heated diatribe and panel discussions, the results are still the same: Donald Trump will be the next leader of the free world.

I want you to meditate on that; let that marinate and seep into your psyche; let it resonate through  your cognitive core and drop into the pit of your stomach. For some it leaves a lingering bitter after taste similar to bile or throw up in their mouths as they cannot possibly fathom what the next four years will be like.

Many people are upset and some have even posited that the elections were rigged. Some question how Clinton could have won the popular vote by such a good margin and lose based on the findings of a ‘electoral college”. Where exactly is this college and who are its students? Tea party members and KKK supporters?

What people do not seem to grasp is that this was not a popularity race. If it was, ‘The Donald’ would not have been allowed to enter the building much less win the Republican nomination because never as there been a more polarised and divisive candidate. Not even his fellow republicans care for him much because at times it seemed like they felt they were stuck with the old mule they won at the county fair and they reluctantly had to carry it home and give it hay and water.

And why do you ask has he been so vilified? Well his utterances are off the cuff and off the charts when it comes to reeking of offense. This man has the ability to probably insult a Satanist.  From Mexicans and Muslims, Gays, blacks, women, pro choicers, liberals, lesbians and everybody in between, he was on a mission, it seemed to “Make America Great Again’ by targeting every American who was either a minority or opposed his radical views. ‘Kumbaya” was definitely not his mantra.

Yes, his words are extreme and his actions it seem was not too far from being deplorable as well, since he apparently stole some seedy moves from the ‘Cosby playbook’.  When it comes to his handling of women let’s just say he seemed rather ‘hands on’ and this left a lot to be desired for most of the fairer sex who found his misogynist demeanour, nonchalance and xenophobia downright untenable. At one point it seemed that this ‘Comb-over Casanova’ could not catch a break as his version of ‘locker room talk’ left most revolted.

…..yet…he won. Hmmmmm. How? Why? Well to be completely honest Trump won for several  reasons but I will share two main ones. The first is not very startling as it happens quite often in societies where people are expecting others to do their work for them. Many of whom had a problem with certain aspects of Hilary’s campaign but were turned off by Trump’s rhetoric, remained neutral during the election process. They did nothing and by doing nothing it played into the hands of the republicans as all those incest-breeders and moon shiners drinkers who want a man of action, even if he’s a sad sack of sorry, they all voters. Not so on the flip side. Blacks stayed home mouthing rubbish about they could not relate to Hilary. What kind of relating did they really what? She ain’t your homie. You don’t do each other’s hair and sit around on weekends binge watching ‘Fear of the Walking Dead’ and ‘Orange is the New Black’. What is it that they really expected from her? Hilary is a politician, meaning she is not always truthful but I think out of the bunch of bad (or poisoned) apples, she was the one less likely to make you sick if you took a bite. They apparently did not think so. Oh well. Don’t complain now and certainly don’t complain for the next four years!

The second reason is a little less palatable but more honest. Trump won because here was this man who finally was saying what no other politician had the guts to say all these decades. He was the mouthpiece of the racist and the xenophobic and the ones that secretly hated immigrants (though their parents were too) and who sat around their dinner tables called minorities ‘spicks’, ‘kooks’, ‘chinks’ and ‘niggers’. They obviously felt like that way all along though American likes to pretend that racism is well and buried (but tell that to the families of all the black men killed in the last five years over silly stuff). Here is a man that stands on a public podium and said all the vile and nasty stuff they have been saying around their dinner tables and in their bedrooms all along. That ladies and gentlemen is why Donald Trump won.