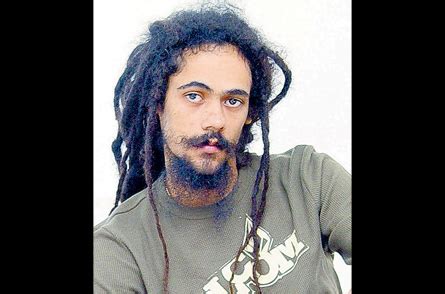 He has always acknowledged that he is the perfect representation of the best of two Jamaican worlds: the grittiness of the streets courtesy of his iconic father and the mystique and refinement that his beauty queen mother brought to the table. Some call him a hybrid, others Damian but most know him as ‘Junior Gong’.

We caught up with the ‘gong to the zilla’ on his earthstrong as he prepared to ‘shell down’ the Reggae Sumfest stage in Montego Bay. No stranger to our local stage where fans never get tired of seeing him chant, his lion mane shake and his lyrics pour over them like the musical balm it is, we wanted to get some insight into the man behind the music who has been giving us hit after hit for more than two decades. It is actually hard to believe that Damian Marley has been at it so long but his repertoire speaks for itself and his journey, according to him, is far from complete.

For Marley, performing on his birthday is a bit ‘inconvenient” as he said that it was important to recognise another trip around the sun. “It’s also a time for people to express their appreciation for you and a great opportunity to reflect on  your own life as well so it’s all good.” To hear him tell it, preparing for a performance does not take a whole lot but as with everything else, you have to stay professional “Me nah nuh special preparation but definitely rehearsals. If more than two weeks past and we haven’t had a show then we do rehearsals to ketch up back to speed. When it comes to Sumfest, there are some songs we want to do here that we haven’t been doing lately.”

Now we all know creative people have their own personal idiosyncrasies so inquiring minds want to know what does this particular artiste have to have in his dressing room. His response was hilarious. “What you talking bout? Weed? Herb? Well herb is always in the dressing room and I wish I come put it officially on the rider but unfortunately you can’t do that everywhere.”

Reflecting on his own life takes him back to one of his fondest early memories of going to the music store and buying 45s, coming home and listening to whoever were the hottest artistes back then and then turning the 45s into the version cut so he and his friends could pretend to be artistes themselves. While he no longer has those 45s, he is proud to still possess a good LP collection. For him, everything about life inspires him to pen music. “Being a fan of music also and Jah inspires me. With work, when you doing one thing alot, you then start to miss the others. I prefer to do anything with music on a day to day basis. Variety is the spice of life though.  I don’t necessarily like to be talking about music contracts for hours on end but it’s something you have to do. ”

To hear him tell it, there were countless early musical influences that helped to shape his musical worldview. “80 dancehall with Peter Metro, Tiger, Stitchie, Pappa San, Admiral Bailey. Admiral Bailey was the first professional artist to give me a microphone in my hand and sey ‘come mek we deejay’. Plus you have Jose Wales, Super Cat and so on. Then the music my mother played in the house like Sade, I really love Sade’s music a whole heap. Stevie Wonder, Ray Charles and then hip hop. I started getting into deep into hip hop when it comes to song writing, storytelling and the construction of lyric.”

And the first tune he ever recorded himself on? “Peter Metro’s ‘Police inna Jamaica.’ I recorded myself singing out to his song.” And speaking of singing, Damian admits that he does not really see himself as a singer. “Me nuh really see meself as a singer still ennuh so if me can sing a song it’s already a merit for me. Of course there are songs that are too high so me just drop the key so for me being considered a singer is a compliment”

As an international artiste as well as a member of a famous family, Junior Gong has been both acclaimed and criticised. So how does he deal with criticism? “Criticism you learn and grow more from. You learn more from a show that did not go off as planned than one that does. Criticism helps to build you. If someone tells you that you’re great everyday that doesn’t help to improve you. Granted, you can also learn what you are good at when people compliment you.”

And when it comes to unruly fans, sometimes it does not stay complimentary. “Yea, we had to handle it a couple of times professionally but sternly. You try to do it in a way that you win over the person and convince them to behave themselves as oppose to ejecting them. I may make a one statement and say ‘settle down’ but for the most part I leave that to security.”

For the Gong, the biggest change in the music industry now versus when he got started is its transformation over the years due to a little thing called technology. “The way how music is being made and consumed now versus when I started, back then you had to have a studio to produce music as oppose to now just having a laptop. And to get into that studio you had the whole apprenticeship system where you have to pass certain quality control as some big man own the studio where as now if you have a laptop you can make music and put it out to the world. It comes with its pros and cons because you have to have a whole heap more creativity and expression of ideas but being that student, you would learn other parts of the craft that helps strengthen the genre.”

And how important is image to him? “It is important to keep it real and equally important to be comfortable as well as presentable. So it’s not really like I have a formula when it comes to image. My image is me, so I don’t have to overthink it.”

Playing an instrument is always a big plus in the music industry and Junior Gong shares that he does ‘dabble around’ with several instruments, “But I don’t play confident enough to go on stage and say I play an instrument. I can play an instrument to write a song. The drum machine would be my speciality.”

And speaking of specialising, though he wears many hats: musician, producer, entrepreneur, it is the role of father that gives him the most satisfaction. Balancing family, music, business and all other pursuits means that some things are priorities and after family there can only be music. “Music is a part of my life so it’s a part of who I am. It’s not looked at as work so if a day pass and I don’t do something related to music, I feel off or that something wrong. Music is natural, you don’t have a guideline or a book, you do it and take it one day at a time.”