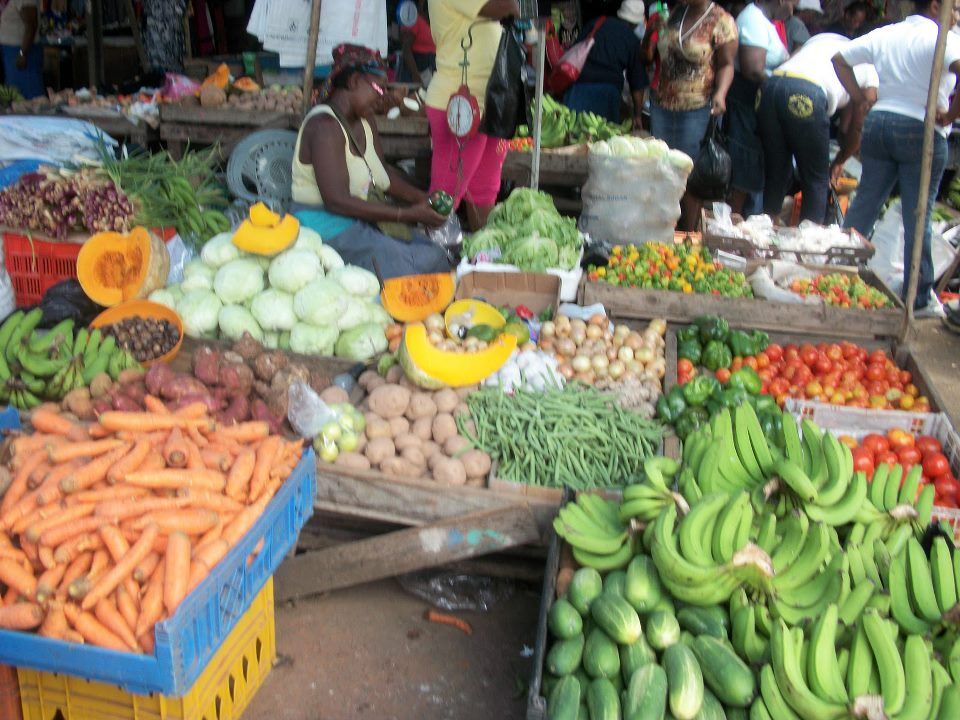 Nothing can prepare you for the sights, sounds and yes the aroma that is Coronation Market.  Jamaica’s largest food market, Coronation or ‘Curry’ for short, is viewed as instrumental in facilitating the ongoing trade and business in the heart of the city.

Serving as the centre of commerce for several generations for well over 60 years, it began as a small space in which higglers could sell their produce, Coronation has since blossomed into a mecca of industry and is in large part one of the reasons why despite losing its luster to newer area such as New Kingston and Half Way Tree over the past few decades, downtown Kingston is still the economic hub of the nation.

Situated along Pechon Street on the western side of Kingston, ‘Curry’ is a huge complex of booths and stalls housing every item you can imagine …and a few you would not. Fresh fruits and vegetables, cuts of meat, cooked foods, beauty supplies, medicinal remedies, clothing, toys, electronics, CDs, toiletries, games of chance and even pets and building materials can be sourced within its walls. Indeed Coronation is akin to a giant mall with a farmers market at its core. Situated on almost two acres, its tremendous cast-iron-framed hall is home to the largest market in the English-speaking Caribbean, making it all things to all types of people from restaurateurs who shop for the freshest supplies for their businesses to housewives who come to get the best goods to feed their families.

Regardless of which entrance one uses, there is always something to see be it fish or fresh fruits and vegetables and when walking around, one has to be mindful of the handcart men rolling through doing brisk business transporting people’s good to their prescribed destination. The decibel level as well is always on high as vendors call out to introduce themselves and their goods to passerbys in the hopes of possible sales. “Sale out pon the plantain dem!” “ A who sey dem waa d Gospel CDs?! Put Jesus back eena you life!, “Taste and buy rat poison me have! If you nuh satisfied, you or the rat can come back and file a complaint!” The calls are many and the gimmicks diverse as everyone vies for your attention.

Every day is a shopping day and it is never too early to get out and hunt for the freshest goods to make your breakfast, lunch or dinner complete as the prices are the most competitive islandwide. While people come to the market daily, rain or shine, it has been said that the best days for bargains are Mondays and Thursdays as these are the days closest to the busiest sale day which is Saturday. Traditionally the vendors or ‘market people’ journey on the back of huge trucks from all over the island, especially the ‘bread basket’ parish of St Elizabeth to make it there in time for the busy weekend traffic crowds.

Come Saturday morning, the place is like a bee colony: all bustling with activity. As early as 5;30am, as the sun begins to peek out to bravely tackle a new day, shoppers begin pouring in armed with their ‘scandal’ and crocus bags as they make their way to their favorite vendors to commence trading. Let the bargaining begin! Huge scales are hoisted on hooks as slabs of meat, yam, potato or melon (pretty much anything!) are weighed and wrapped in old newspaper or clear plastic bags. After all that shopping, many stopped by an entrance for a quick refreshment courtesy of their favourite ‘jellyman’ who is more than happy to serve you a coconut either ice cold or room temperature and for those who want the added treat of eating the delectable meat inside, he will simply shave off a piece of the husk which will then double as the broadest spoon you will ever use! Yup! Market life nice!!

When it comes to security, this is no longer much of an issue as in 2014, the Jamaica Constabulary Force launched ‘Operation Resilience III’ in the market district and surrounding environs in an effort to make the area safer for shopping and conducting business which includes drivers being able to park their vehicles without any harassment or hassle. To date, the initiative has seen tremendous success.

Always a hot bed of activity and believed by many to be the heart of Downtown Kingston, Curry is the one constant in an every modernizing capital city. Indeed it holds a special place in the hearts of thousands as almost every single Jamaican has some memories of shopping at ‘Curry’. In 2010, the Digicel Foundation sought to bring the old market into the 21century after a huge fire destroyed a portion of the facility. Pumping close to $200 million to refurbish sections of the market, they created a contemporary, spacious facility covered by an ultra-modern roofing system, making the market bright and airy. In addition to renovating the covered section, they built some four hundred and thirty-nine neatly proportioned vendor stalls, all of which have been numbered and retrofitted and the walkways now bear street signs. Digicel has also established a micro-business centre there with full internet plus cell phone top-up facilities. All of this has not only enhanced the overall shopping experience, but also endorses its appeal as a bonafide tourist attraction.

For many, Coronation is akin to a mini community where vendors are like neighbours, watching each other stalls and helping out when called upon. It is very common to see sleeping babies in laps, toddlers playing, children doing homework or running errands as the whole “it takes a village to raise a child’ philosophy still holds true for ‘country people’ who value friendship and family values. Indeed most vendors are second or third generation higglers weaned on hard work as well as the fine art of negotiation. It is that sense of camaraderie that pulls shoppers in and then makes them pull their purses out. Indeed few actually leave ‘Curry’ in a hurry as they come for the produce and stay for the animated and colourful conversations.