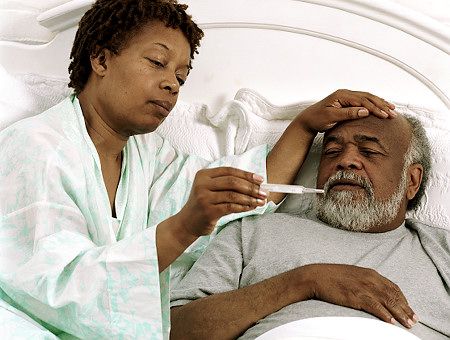 They cry, they whine, they throw tantrums when they don’t get what they want or when you don’t pay them enough attention as apparently the world is coming to an end. They complain about everything and most are hypochondriacs who think they are actually knocking on death’s door and want you to hold their hand as they depart this wicked, wicked world.

By now I hope you’ve probably realised that I’m not talking about babies or toddlers but grown men who are said to be the braver, stronger ones in the human species but based on my experience when they get sick, even if it is something as simply as a cold, they are hopeless, helpless and mostly a pain in the neck (not to mention a pain in the lower region as well).

For the typical female we work through everything not because we’re superwomen but because we really have no choice. It’s that simple. Our bosses don’t become less demanding; the house isn’t gonna clean itself and children still need to be carried to and from school and extracurricular activities and quite frankly no one cares that we are sick. If we have a cold or the flu, we suck it up, stuff tissues into our bosom (if not directly up our nose to stop the leakage!) and we push on through.

Sometime our illness are much graver and even then at times we just make the best of it and try not to inconvenience others and go about we business.

Well…not so with men. The world must stop on its axis when they get sick. These men can’t deal with a splinter in their finger, much less handle a needle for drawing blood so they worst can’t cope with being sick for even 24 hours. If they have the flu they expect to be waited on hands and feet with food, cough medicine, painkillers, tissues and the works. It is a wonder they don’t ask us to wipe their butts too!

They moan and groan and every hour they want us to take their temperature and see if it has skyrocketed as they feel weak and dizzy and some even claim to hear angels singing as if they are being called to heaven! Goodness gracias, what a set a people can get overly dramatic.

They want their pillows fluffed, their favourite music playing, their favourite TV shows on and the remote handy. You are not allow to make any loud or sudden noises as apparently that makes the ‘sickness’ worse and on occasion when they get sleepy some may even ask that you sing them a lullaby. What is not dis pon we!

Yep most men can’t handled being ill very well. Of course there are the exceptions, the men who never let anything get them down and if they are down do not gripe or complain. Wish I knew more of those types still.