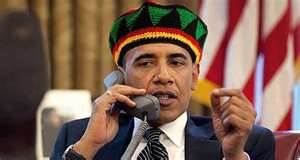 For two days our world was turnt on its axis, life was disrupted and traffic changes in the heart of the city were a nightmare to navigate. Yep the ‘big man’ had touched down on the soil and everybody was buzzing about it, even those who said they weren’t ‘frightened’ fi no US president. In the end even they had to grudgingly admit that they thought it was a big deal to have Barrack in Jamrock.

Indeed we did some serious housekeeping with the fixing of some roads, painting of walls and spit-shining for an overall curb appeal. Unfortunately we tore down the vendors’ stalls which was an overkill I believe but generally most felt it was a positive experience even if they didn’t get to take a selfie with ‘potus’

After all the hoopla, I decide to note what I thought would be some changes that would have occurred if his visit had been a lengthy one. Read and have fun. I am merely poking fun at it all so don’t be offended by the scenarios I have crafted.

>We would all talk to each other with a yankie accent!

>All potholes would be gone

> Crab season would be suspended

>All the mad people would find permanent residence in Bellevue

>Chronixxx would retreat to the ‘bobo camp’ by 9 miles

>Basketball and not track & field would be the most popular sport

>Palais Royale would be more popular than the hip strip

>We would run out of Jerk chicken and Red Stripe beer

>All the secret service men would have new baby madas

>We would greet each other saying ‘waaa gwan bredren?’

>Lisa Hanna would book a suite at the Pegasus!